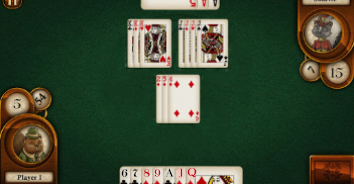 Indian Rummy game (also known as Paplu) is one of the most popular games in India. The obsession of the game is rooted in the simplicity of the game which can be enjoyed by people from diverse Indian communities. Indian Rummy games have been a part and parcel of Indian family traditions long before the British ages.

Although the exact history of Indian Rummy is still surrounded with mysteries, the game has received unimaginable success like never before, thanks to the advancement in technology.

Looking to try out online Rummy games for real money? Want to brush up your Rummy skills before playing the real deal at our audited and handpicked online casinos?

Look no further! Our professional expert casino team at Casino Bonus India is here to help you in your live and online Rummy game quest. Learn from professionals with step-by-step guidance.

The elements of a Rummy game 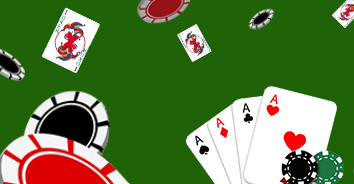 The game of Rummy consists of very small but important elements to become the most loved card game of India. These elements are either involved in the gameplay or are the basic instruments that are used in the game. Without these, a Rummy game can never be what it is. Hence, it is really important for you to be aware of these terms before we get deep into the game.

Aim of the Indian Rummy game

You need to make at least one pure sequence and any other valid sequences to win the game. Keep in mind that you are not allowed to make a Rummy declaration if you do not have a pure sequence. 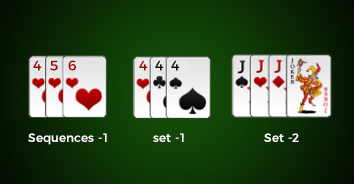 How to use Joker

You probably can see how important the Joker is in a game of Rummy. It makes the game even more exciting and intriguing. Hence, you now might be wanting to know how a Joker can be used in the game. Let’s see how to use the Jokers of the game.

The Joker can be used under certain conditions that must be known to a player to have a smooth gaming experience.

Anyone who has ever played an online Rummy game knows that the game is played and the final winner is decided with the help of points. Each card that is used in the game carries a certain number of points that are added up to calculate the total point in the round. The points are distributed as followed:

In every Rummy game, the value of a point is prefixed. The total points that the winning player gets in all the rounds are used to calculate the total winning amount. The total point of the winner is calculated by adding up the card value of the loser at the time of the declaration by the winner. For example, if the losing player has 2 Q’s left in his hand when the other player has successfully declared a win, the winner is rewarded 20 points.

The reward amount of the winner = Total points of the losing players x value of each point – Rake.

The rake is the commission that a casino takes from the winning amount being given to the winner. For example, if the value of each point is predetermined as ₹100 and the rake percentage is 2.5%, the winner will get:

We hope that this example might have cleared the calculation of how much can you win in the game. So now let us get into the Rummy table.

The layout of an online Rummy table

The layout of an online Rummy table depends upon the number of players involved in the game. However, the basic options present on the screen are the same in all variants of Rummy. As you open the game, you will find a virtual table on your screen with players’ id on the side of it. Here, you will get to see your cards at the bottom of the table. These cards are in random order since they are dealt from a shuffled set of cards. You can arrange the cards according to their card value and suit by clicking on the ‘Sort’ button on your screen. The table will depict multiple necessary details like the time left for you to make your move, the point value of each point, and your total points. The center of the table is filled with down-facing and discarded cards. You can click/touch on the card to pick the card from the center and then click on your card to discard the one that doesn’t suit your hand.

The Rummy table doesn’t have a lot of clickable options like a Blackjack game or a Teen Patti game, which is why it is often said that Rummy is one of the best games that can be played online.

Hence, you don’t need to place a bet with your real money every time you play a round of Rummy. Convert your real money into chips and then, place bets through those chips to play the game. A minimum submission of chips is mandatory to begin the game.

The gameplay of Indian Rummy game

Now, that you are well-acquainted with the aim and sequences, let’s dive into the basic rules of the game. An Indian Rummy game is played between 2-6 players with 2 standard decks of cards.

Starting with the player on the left, the dealer starts dealing one card face down to every player. Each player gets 10 cards when there are 2 players in the game. If there are 3 or more players, every player receives 7 cards and if there are 5-6 players, then, every player is dealt 6 cards.

The other cards are placed on the table face down. This becomes the stock. Now, the top card of the stock is turned face up. This becomes the upcard. The upcard is placed next to the stock to initiate the discarded pile. If there are two players playing the game, the winner of each hand deals the next.

First comes the draw phase. The players begin by taking one card from the top of the stockpile or discarded pile and add that card to their hand. As the discard pile is placed face-up, you can see what you are dealing with. Contrary to that, the stock is face down so you have to take that risk if you do not want to show the other players what card you are adding to your hand.

Once you get a valid sequence in your hands, you can lay the combination down on the table in front of your face up. This is called melding and is an optional move. In a single turn, you cannot meld more than one hand. You can also lay off your cards.

Once a player manages to make 2 sequences (at least 1 pure sequence) by arranging the 13  cards, he can make a declaration and win the game.

How and when to declare

The speciality of Indian Rummy is the ability to declare without completing all the sets and sequences. The conditions under which you can declare are:

By reading the table, it is conclusive that you cannot declare until you have formed a pure sequence and a supporting hand.

Rummy is certainly one of the best games you can play online. The online Rummy is very similar to how you would feel playing Rummy at home. In fact, it is even better as you can play the game in the comfort of your convenience. You can play it while going to your office, or you can play it on a solo-trip. You can play it when you are back from a tiresome day. However, that is not all that makes Rummy a great online game. There are other factors as well, like the amazing winning amount you can win at an online casino. Therefore, we bring to you some efficient tips to aim for the win. Keep them in mind to make the most of this evergreen game. 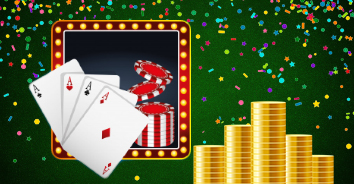 Did you know that you could win a bonus amount if you win in a certain way? Yes, a bonus over your winnings. If you choose not to declare after having a pure sequence and another set/sequence, you can win extra points for completing all the sets and declaring at once. This means that you declare only after forming a pure sequence, an impure sequence, and two other sets; all at once. However, this method is risky to attempt to but definitely pays off much more than the normal winning amount.

The whole motive behind any casino game should be fun, and not making money. Hence, here are a few fun facts about your favorite card game to keep you entertained.

Is Rummy online allowed to play in India?

Rummy is one of the most popular games that is played by a majority of people in India. It is not considered illegal. Many trusted and licensed online casinos in India offer players the chance to play this game online securely.

How do I win in Rummy?

The online Rummy is very similar to that of Rummy played offline. To make the most in the game, the player must pay good attention to the cards placed by his fellow players.

Can I play Rummy live?

Why not! You can enjoy playing Rummy live with proficient live dealers instantly in real-time with just a click of a button.

Where can I enjoy the best Rummy game experience?

We, at Casino Bonus India, bring to you a list of all the premier online casino sites that offer players with splendid Rummy games online. So don’t miss it! Check out the list today and get started instantly!

Can I earn money from Rummy?

Definitely! Rummy can be played online for real money. It also offers the players with amazing real money rewards and prizes that can be claimed by the player if luck favors him. Good luck!